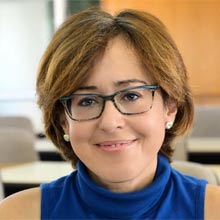 She was awarded two European Fellowships and a UK fellowship aiming at research on aquatic animal nutrition for aquaculture. Her research interests lie mainly in organic and sustainable aquaculture, aquaponics and gut microbial communities’ diversity in aquatic animals and in nutrigenomics. She has cooperated with more than 20 research teams in different countries through national, bi-lateral and EU funded projects.

She currently serves in the Editorial team of 5 well-respected peer-reviewed scientific journals and she is Associate Editor in the Journal of Crustacean Biology and Aquaculture International. She is actively involved in several research projects supported by the European Commission, national programmes and by the aquaculture industry.

She is a member of the Hellenic Aquaculture Technology and Innovation Platform (HATiP), the sub-group for technical advice on organic production of the European Commission (EGTOP) and served as an expert (reserve list) at the European Scientific, Technical and Economic Committee for Fisheries (STCEF). She was elected European Governor of the Crustacean Society for 2011-2013, re-elected for 2013-2015. She was elected as a member of the Board of the European Aquaculture Society (EAS) for 2012-2014, and re-elected 2014-2016 and 2016-2018.