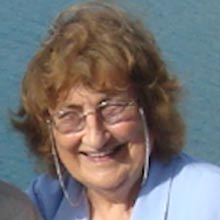 Margaret Eleftheriou, founder director of AQUALEX Multimedia Consortium Ltd, has had extensive educational experience in the UK and Greece at secondary and tertiary levels. She participated in major curriculum development initiatives in Scotland from 1979 - 1992. From 1987 - 2001, she taught English (ESP Biology) in the Department of Biology, University of Crete.

Her involvement as special  consultant at the Institute of Marine Biology of Crete led to a series of educational training and marine science videos as well as the production of several acclaimed CD-ROMs, the most important of which were AQUALEX (aquaculture terminology, now in 8 languages), Basic Techniques in Fish Haematology; Spotlight on Greek Marine Science (English and Greek).

She was an active member of the SOCRATES Thematic Network AQUATNET from 1996 to 2015, contributing reports on Mutual Accreditation in Aquaculture, joint editor of White Paper in Education and Training in Aquaculture for the New Millennium and reviews on the ongoing status of the Bologna Process. She was guest editor on the peer-reviewed Springer Aquaculture International Teaching and Learning in. Aquaculture to which she contributed 7 articles as lead or 2nd author.

She worked extensively on the WAVE initiative, as well as the VALLA project, and drafted the AQUATT submission on ECVET (European Credit Transfer for Vocational Education).

In 2011, she was nominated aquaculture representative in the Agriculture, Fisheries and Forestry Reference group of the EU 2020 ESCO (European Skills/Competences Qualifications and Occupations) Initiative, in which she was actively engaged until 2016.

She contributed her expertise in VET Learning Outcomes to the highly successful MATES project (Maritime Alliance for fostering the European Blue Economy through a Marine Technology Skilling Strategy: 2018 – April 2022).