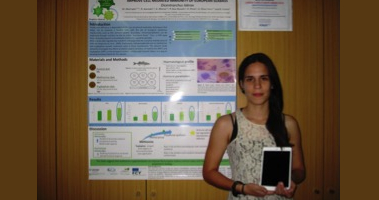 The aim of Marina’s study was to investigate the effects of dietary supplementation of the amino acids methionine (MET) and tryptophan (TRP) on the European sea bass cellular and humoral (immune system) status, in order to develop functional feeds for this species. She receives an iPad mini, sponsored by AquaTT, and a book prize from Wiley-Blackwell.

During this year’s competition, more than 100 student posters were evaluated by a team of three judges: Kjell Maroni (Director R&D aquaculture, Norwegian Seafood Research Fund & President of the European Aquaculture Society (EAS) Board, 2012-2014), Dr Elena Mente (Associate Professor, University of Thessaly (Greece) and Board member of the EAS), and Marieke Reuver (Programme Manager, AquaTT and Director of AMC). The award was presented to Marina in absentia by Kjell Maroni during the wrap-up session of the AE2014 conference.