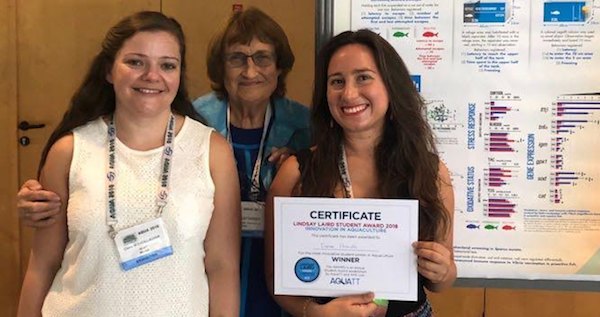 On 28th August the 11th anniversary of the Lindsay Laird Award was celebrated in Montpellier, France.

The winning poster was entitled ‘Do Differences in Coping Styles Influence Stress Response after Vaccination in Gilthead Sea Bream?’

Student winners of the award for innovation in aquaculture have so far come from Belgium, Spain, Portugal, the Czech Republic, Germany and Brazil.

This historic university city, close neighbour to Palavas-les-Flots, long known as an important location for French aquaculture, was very suitable as a venue for the EAS 42nd International Conference. But the city was also a happy choice for the prestigious Lindsay Laird award. Dr Laird not only translated G.Barnabe’s seminal 2-volume work on AQUACULTURE from French into English (1990), but also paid several visits to the city while working on the AQUALEX glossary.