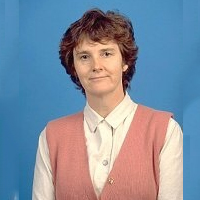 At the time of her early death from cancer in 2001, Lindsay Laird was a Senior Teaching Fellow in the Zoology Department at Aberdeen University. From the beginning of her career, Lindsay worked with the expanding Scottish aquaculture industry on different aspects of salmon farming. In 1998, she became the first Chairman of the Organic Fish Producers’ association. She served as Vice-Chairman of the Scottish Fisheries Executive Committee and on the Board of Directors of the European Aquaculture Society from 1994 to 2000, when she was obliged to retire for health reasons.

Lindsay also carried out research and gave lectures in countries such as Malaysia, Taiwan, Singapore, Philippines, and Borneo, where a new species of moth (Dasychera lairdi) was named after her. Lindsay Laird was a remarkable woman, moving easily between the rival spheres of teaching, research and industry, and excelling in all three. A high achiever, relishing being the first with the latest, she nevertheless hugely enjoyed her contacts with people at all levels in all three areas. She was generous with her ideas, triggering numerous research projects as colleagues approached her always open office door. She virtually ran an unofficial one-woman employment agency handling enquiries from fish farms looking for personnel or advising students or ex-students.

Right from the start of her career she worked along with the expanding Scottish aquaculture industry, on different aspects of salmon farming, later developing the concept of a green label for farmed salmon and defining the standards for Organic Farm Salmon, becoming the first Chairman of the Organic Fish Producers' Association in 1998. As scientific adviser to the Shetland Salmon Farmers' Association, she was extremely active during the turmoil caused by the Braer oil tanker episode to the islands' salmon industry, She also served on the EAS Board of Directors from 1994 till 2000.

At her untimely death from cancer in 2001, Dr Lindsay Laird was a Senior Teaching Fellow in the Department of Zoology at the University of Aberdeen. However, in no way did she conform to the stereotyped image of the academic research scientist, though her many and varied publications, as well as her work as series editor of the Ellis Horwood Aquaculture and Fisheries Support Series, her translations (Barnabe's Aquaculture, Billard's Carp: Biology and Culture) and her joint editorship of Handbook of Salmon Farming (with Dr Selina Stead) demonstrate her international academic standing. In the words of Professor Priede (Director of OceanLab, Aberdeen), Lindsay's husband: "Lindsay Laird will not be forgotten by the many whose lives she touched”.